Whew! Made It!
Winning the Holiday Stress Game
William Sundwick
Little kids love to think about presents from Santa. I certainly did. And, as a teenager, I was eager to spend New Year’s Eve with my cousins in their suburban home. But, in adulthood, it’s all changed. It is still about me. But fear, obligation, and guilt have replaced the excitement and anticipation I remember from childhood.
If only I could start planning earlier. But Thanksgiving preps for the big meal, seemingly make it the earliest possible start date – and needed relaxation/recovery after that Thursday production means, realistically, beginning shopping only the following week, then setting calendar dates for various social obligations.
My wife always bears the brunt of the stress, for she still works full-time. And, she is the one with the relatives in California! Their gifts, yet to be bought, must be shipped no later than Thursday, Dec. 20. Not to mention the deep conflicts with her sister, my wife the “good” daughter who stayed close to her parents until the end. Her older sister, and husband, escaping to California.
It is two weeks into December before we can even decide who among the immediate family and next- door neighbors (virtual family) will host which get-togethers. Christmas Eve, Christmas Morning, Christmas Dinner, all planned separately. Everybody wants a piece of the action (except younger sons of both families, free from the burden of hosting because they lack houses of their own). And, of course, the grandkids are also free of much responsibility — Brennan, age 10, does gift Owen, age 3, Mira, age 4 months relies on gifts from adults, gives none herself! Except for the growing numbers of grandchildren, it’s the same every year. You’d think it would be easier by now. 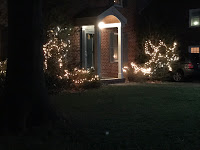 Decorations, including outdoor lights, are deployed by end of second week in December. Tree comes only in third week, trimmed by me — alone, always – can’t convince wife to get into the spirit. Bah, humbug!
Need to allow time to wrap everything for everybody. This is the most excruciating part of Christmas for me – I am wrapping-challenged, both spatially and small motor coordination-wise.
Wife does all the shopping and wrapping for her sister, brother-in-law, their daughters and grandchildren in California. I manage to deliver the three large shipping boxes to the post office by Thursday afternoon, December 20.  Priority mail, appropriate insurance. In the meantime, I have been shopping via both Amazon and Tysons Corner for wife and sons, including a trip to Best Buy. (Say what you will about Amazon, but on-line shopping has done a wonderful job of reducing the stress of holiday crowds). We jointly ventured to brick-and-mortar stores in Falls Church for each other and our two grandchildren. Not so bad as the giant Tysons Corner Center! Although the mall does allow me to quickly get my prescribed 10,000 steps for FitBit.
Christmas Eve church service is no longer a thing for us, since the 11:00 candlelight service has ended.  It hasn’t been a thing in our two sons’ lives for much longer. Not so our next-door neighbors. Linda’s Christmas Eve dinner will not be served until after they return from their early evening mass. Getting a little late for three-year-old Owen’s bedtime.
Son and daughter-in-law have decreed that Christmas morning will be at their house, including presents for Owen and baby sister, Mira. Brunch for all. Since the tree at our house is laden with too many presents to reasonably open in one morning, we select a small sample for Owen and Mira, and drive over.

The Christmas orgy of flying gift wrap, handing out presents to each person assembled, serving Christmas dinner with snacks and beverages beforehand, desserts after, will be – as it is every year – at our house later in the day.
My wife does not fully partake of the orgy – she is too busy in the kitchen. She takes breaks to open presents. Only her husband will relieve her in dinner prep. My two sons? My daughter-in-law? Where are they? Why, they are entertaining the grandkids, of course! And themselves, by extension.
Cleanup continues late into Christmas night, with the good china and stemware waiting until the following morning when we are more alert.
Since county trash collection has been postponed until Wednesday, all gift wrapping is hurriedly collected in one big bag, without separation into recyclables vs. non-recyclables – and placed in the recycling cart (my bad, I thought my wife had sorted through the bag first!). American Disposal Services, the waste contractor, must have been prepared for this eventuality on the day after Christmas (Boxing Day in the UK, perhaps Recycling Bin Day here?).
One secret to surviving the stress of all this holiday anxiety is not to plan anything for New Years Eve! Nothing should ever be on us for that anniversary. And, we usually don’t risk going out, either.
Peaceful reflection on what we have accomplished during the preceding month or so of uninterrupted angst is the best antidote to stress. My wife will bake more, but because she wants to – not because anybody expects it. And, our “holiday letter” to all our remote friends and relatives gets delivered in generic “holiday” cards (not Christmas), on a relaxed schedule around Epiphany.
The pushing stops. The living-up-to-expectations gone. My wife returns to work. I go back to my daily retirement routines – writing for my blog, neighborhood walks, regular workouts at the gym. And, all the gift returns restore the status quo pro anteof the holiday season. As though it never happened. When the tree goes out to the curb for the second special pickup, all that is left is to wonder if we can somehow do better next year at stress reduction – nah! Too many other things to think about.