Crossing Imaginary Borders
Subtle Transition from Toddler to Preschooler
William Sundwick
He’s three now.
Birthdays are getting to be old hat for my grandson, who is learning to take them in stride. The calendar is still a fuzzy concept though. When asked at his party on Saturday, “when is your birthday, Owen?” his reply was “ummm.” I think he didn’t know or understand that it wasn’t until the following Monday, two days away. He knows about changing seasons:  it’s Fall because of the leaves changing color and falling to the ground, Winter comes next, when it’s “Colddd!” – but since we had an early snowfall a few days before, which melted, it must mean we already had Winter?
The idea of years is still unknown to Owen. Not long ago, during an excursion to the local elementary school playground, when Mom told him that the adjacent building would be his school when he gets to kindergarten, he explained to all of us later, “I’m going to kindergarten!” But, when? For several days, his favorite refrain was “I want to go to kindergarten.”
His answer on Saturday to the question, “how old are you, Owen?” was confident, unhesitating –

“Three!” That was, after all, the number stuck on top of his cake! If his grasp of the calendar is less than precise, his new comfort with himself as agent and actor is quite precise. He now always begins declarative sentences with “I want …”, “I did” or “I’m going to …” He no longer refers to himself in the third person, like he did last year, when declarative statements often began “Owen is …” or “Owen does …” The discovery of “I” is philosophically important.

Developmentally, there is a distinction between looking/hearing/moving and seeing/listening/deliberating. Owen did eagerly show off his very deliberate “exercises” to me on Thanksgiving, learned from his mother. I could duplicate only some of the stretching myself! He is clearly more agile at three than his grandpa is at 71.
He looks around trying to find what to do next but seems more attuned to revisiting the familiar (at our house, at least) than exploring the unfamiliar. Repetition of play behavior associated with us is the most likely trigger, either at our house or his.
Conversation is an art Owen is still developing. He hears what you say, and frequently parrots it back (including new words), but there is less evidence that he is listening and processing a response. He retains his favorite response to any statement, as he has for some time: “Why?” Retorts with this interrogative are what pass for conversation – and, it does have its charm. Mostly, however, we listen while he talks.
According to his dad, Owen is also showing signs of another aspect of Self – he is beginning to lie! He apparently can code what statement or which answer is most likely to get him what he wants and supplies those words. Regardless of whether they are objectively true, even to Owen.  I encountered an example when babysitting at his house the day after his party. “I have to go potty!” said O., “Okay, do you want to use the big potty or the little one?” (i.e., the regular toilet or the portable “Lil’ Loo” toddler training potty in his room). His choice, ”the little one”.  We go upstairs to his room, “all done!” “Okay, let’s go in the bathroom and wash your hands,” moving next door expecting him to follow, his answer, “Daddy says I don’t have to wash my hands when I use the little potty” – “Oh?” seemed reasonable only for a preschooler who knew he didn’t soil his hands anyway, and didn’t understand the need to take more time from play. Dad confirmed later, it was a lie!

Owen relates to others as you might expect. Most people in his life are there to pay attention to him and serve him. The only noteworthy exception is his baby sister Mira, now three months old. She doesn’t seem to owe him anything. Perhaps she’s still enough of a novelty to be entertaining for Owen. But everybody else must respond to his commands, “Watch me!” or “Play with me!” Oddly, one of the hallmarks of his toddler assertiveness, “Me do it!” has given way to “You do it …” – is it laziness? Or, more likely, impatience with skills already mastered? He will watch, to see if he can learn more, especially small motor tasks, like operating a screwdriver, but is less likely now to have the patience to perform a task himself. Sometimes, he almost takes pride in saying “I broke it!” so that he can then demand, “Fix it, grampa!”
Play-acting has remained one of his favorite activities for some time. He will be a monster, a dinosaur, a bear, or a pet. Something that can roar or make animal sounds. Often, he plays the role of a worker “man” (fill in the job, followed by “-man”). Having a job seems to be rewarding for him.
Whether animal or worker, he’s usually aware that he is play acting. He doesn’t really believe he is that character. Even when playing with toys, or building with blocks, he frequently slips into the play-acting mode (he’s a monster and smashes the house he’s made with blocks, or a “package man” who drives a toy truck to the opposite side of the room to make a “delivery”). Indeed, play-acting seems to capture his imagination more than engineering. When he builds with Duplo blocks, his buildings

often have no doors or windows, but are simply enclosures for a toy vehicle (a “garage”), or are towers, whose only purpose is to be as high as possible before tumbling down. Although, he does seem to be aware of the need for “stabilizers” on structures made with blocks, it seems awareness of physics is primordial at best.

Owen’s new favorite word, potentially a replacement for the interrogative, “why?”, is “actually.” The meaning of this preface has clearly been learned from adults (his parents?), and in O’s case it is not intended as a statement of fact. Instead, it denotes rebuttal, or change of mind. Much as “why?” is intended as a conversation starter, “actually” at the opening of a statement is intended as an assertion. Owen is declaring, “now it’s my turn!” So, every sentence begins this way.
Do all these observations of my grandson indicate anything more than that he’s growing up? Probably not, but his new mad skills appear to position him advantageously for entering the pre-school of his choice, any time his parents deem it appropriate. Owen’s mother, however, is a professional early childhood development specialist. And, his father is a highly analytical team-building media professional. The family day care center three doors down their street has been Owen’s comfortable 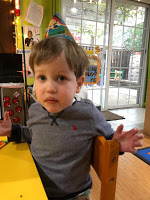 second home since he was an infant. His parents feel that “Miss Eymy” continues to run a supportive, nurturing, and educational environment for her charges – and, now she can accommodate little Mira, too! Not likely they could find a better setup in the short term. So, at least for another year, the day care arrangement will remain unchanged. It is already Owen’s “school.” He has always called it that, as have his parents. Miss Eymy even regaled him with chocolate cupcake on Monday, for a second birthday party!

Although his dad and uncle were both enrolled by age three in more formal pre-schools, we are but one set of grandparents. This grandfather is willing to grant Owen’s parents more good parenting sense than we ever had. Owen will be fine in his fourth year!