Car Shopping, 2018
The Washington Auto Show
William Sundwick
My biggest challenge of the Washington Auto Show was meeting up with my wife. She beat me there by over twenty minutes – Metro from Capitol Hill was faster than traffic from Northern Virginia during afternoon rush hour. The Walter E. Washington Convention Center is spread over two buildings and nearly six square blocks. Most of its entrances were closed. How could I get in? Which building?
Frantic texts trying to describe our respective locations in the cavernous complex resulted only in both of us simultaneously finding helpful staff to guide us to where the other had said they were! Eventually, after clarifying who was to remain stationary, we met. The problem seemed to be that both our descriptions made it seem like we were in the same place (ticket sales), when we were really in two different buildings.
Why Did We Come?
What business did we have at the 2018 Washington Auto Show, anyway? We weren’t exactly desperate for a new car – although, after eleven years, our 2007 Toyota Highlander is starting to look like it needs replacement. But, these days, 85,000 miles is nothing. The real reason we claim to be shopping is nothing more than my fetish for new cars and fascination with the vagaries of automobile marketing. Can’t kick the habit, no matter how hard I try! 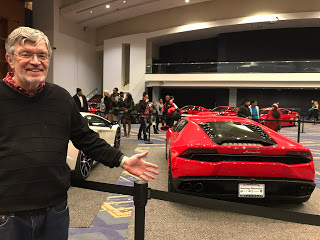 Of course, there were the exotics and special interest cars on display – up on the third level of the Convention Center – good for some “Wow” exclamations, and photo-ops. Bentleys and Rolls-Royces, Ferraris, Lamborghinis, and McLarens.
We had been informed by posters at the entrance, however, that neither Cadillac nor Mercedes were exhibiting this year. They must have calculated there were no sales to be gained from participation. Slightly mysterious, since BMW, Porsche and Audi were clearly visible, and those exotics on the third floor were also sponsored by authorized dealers.
Shopping for more mundane transportation needs was our excuse for attending, though. We saved the fun and photo-ops until the end.
The Research
Performing due diligence through online research is my job. Reducing my range of choices based on practicality is my wife’s job. Due diligence took the form of a spreadsheet based upon my research. We knew which market segment interested us (midsize crossovers), to which we added the somewhat meaningless requirement that whatever the replacement for our Highlander would be, it must have at least the same level of features it has. I quickly discovered, however, that NO midsize crossover sold in 2018 is as spartan as our 2007 Highlander! And, prices have risen accordingly. (One feature noticeably lacking from all 2018 contenders, however: a cassette tape player in the audio system. I don’t even think they have CD players, anymore. My ’07 Highlander’s JBL has both).
I read and summarized reviews of various models for my spreadsheet, and collected data on cargo volume, curb weight, fuel economy, horsepower/torque ratings of engines, 0-60 mph acceleration times, and price ranges based on each make’s “Build and Price” web page. My wife dutifully went over all the data in my spreadsheet. Her job was to pass judgement based on the numbers: “That costs too much! That’s horrible gas mileage! Why do we need a V6? I don’t want to drive anything that big – forget the three-row seating vehicles!” She knew her role well.
The dynamics became clear. When we started seeing and sitting in the various contenders at the Show, we both knew we would leave with a much smaller list — if we wait until next year, there will be more choices.
The midsize crossover segment of the market is very large these days – and very hot in sales. My spreadsheet, in its final form before the show, contained 22 different vehicles. But, after spending more than four hours at the show, and discussing what we learned, our list now contains eight vehicles – all with only two rows of seating. No hybrids on it, yet fuel economy will be the same or better than our 2007 Hybrid Highlander – efficiency of all engines has increased that much in the last eleven years (mostly because of advanced turbocharged fours). Cargo volume may be slightly less than our Highlander’s, especially in the five “compact” crossovers on our revised list, but all have roomy and comfortable passenger cabins.
The Finalists and the Market
Here are the eight finalists: five smaller – Chevy Equinox, Ford Escape, Honda CR-V, Subaru Forester, and VW Golf AllTrack. And, three bigger – Ford Edge, Nissan Murano, and Subaru Outback. Near-luxury two-row contenders from Acura and Volvo were eliminated due to “costs too much” criteria, and all three-row crossovers from my original list were eliminated due to some combination of size, price, and fuel economy factors. The GMC Terrain was eliminated because of the brand’s marketing image – it’s a TRUCK brand!
Three different engine configurations exist among the eight finalists: five of them have those little turbo 4s, the two Subarus have their characteristic “boxer” (horizontally opposed) engines, and the Nissan Murano still uses a V6 (it is the most economical of all V6s – EPA rates it at 21/28 mpg).
All contenders have many “active safety” features (using external sensors and actions), like collision avoidance, lane change warning, backup cameras — unknown eleven years ago except in the most expensive luxury models. And, all eight finalists feature higher quality interior design than our Highlander – mostly leather, heated seats, center-mounted touchscreen for infotainment and climate control. All except Forester offer Apple CarPlay, enabling access to all the apps on our paired iPhones via the infotainment system.
I never assume that the car-buying consumer always makes the right decisions, and my wife is not even aware of market share for the 22 vehicles on my original list. Yet, we seem to have come down to primarily the dominant players in the market. Two exceptions are that at least one of us (me) was really impressed by the Golf AllTrack wagon, despite its relatively modest profile in the U.S. market. And, the Toyota line for 2018 – both Highlander and RAV4 – were nixed by one or both of us, the former due to size (much bigger than our 2007), the latter because of inferior “fit and finish” compared with its main competitors (looks cheaper, less classy). Toyota may well remedy the RAV4 problem next year with a new generation due in 2019. But all our finalists, except that VW, are strong contenders in the most competitive market segment existing today. Could it be consumers really are intelligent beings? Or, is it that we have now sunk to the level of average auto-buying consumer?
Our next step will probably be arranging test drives at dealers. But, there is no current schedule allocating time for that adventure. We may delay until the 2019 model year, with its new choices, before taking such action. But, the Auto Show was fun – first time we’ve indulged the annual extravaganza since 2011. We practically closed the place down shortly before 10:00 on a Friday night!
Appendix
Crossover Shopping, 2018 – The Eight Finalists (Alphabetically), photo of spreadsheet 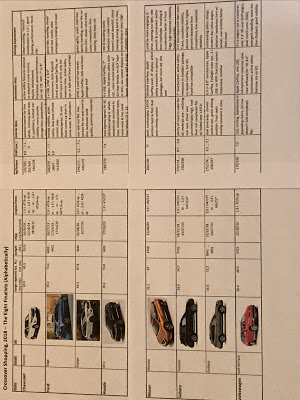