Arrival and Insertion, 1953-62
The Flint Series, Chapter 3
William Sundwick
Flint grew rapidly in the early fifties. The 1950 Census pegged its population at about 163-thousand, but by 1960 it was 197-thousand. We all noticed it.
New neighborhoods, like our Ballenger Highway neighborhood, were adding single family houses, in ours mostly “ranch-style” (often called “ramblers” on the East Coast), at such a rate that services couldn’t keep up.
Schools needed to be expanded quickly. Since the nearest elementary school to us was over a mile away (no buses), four hastily erected prefab “primary units” for grades K-3 served as a stopgap.  These one room units, identical except for paint color, were in use until we moved out in 1965, when the new Anderson Elementary School finally opened in the neighborhood.

Henry Wadsworth Longfellow Elementary/Junior High School had been built on Chevrolet Avenue in 1928, only a few blocks north of the old “Chevy in the Hole” complex. This was the original dedicated Chevrolet and Buick assembly location, built in the teens. From 4th grade on, I was deemed capable of walking safely the short mile from my house to the school.
It was a pleasant enough walk, except in winter when Flint became frozen tundra for four months.  I seldom had to walk alone, always accompanied by chums in my grade. It was a friendly neighborhood, with many kids my age.
We strolled down Winona Street four blocks to Mackin Road, then east on Mackin another five blocks. It was a big school compared to those one-room prefab primary units. There was a spacious playground, a gym, and a library.
My friends included Abe, who lived on Mackin Road – I stopped at his house each morning to pick him up, and we walked together. He was the elder son of Holocaust survivors who had somehow found themselves in Flint, moving from New York (Brooklyn?) a couple years earlier.
There was also Charles. He walked from his house on Begole Street a block away, and we would proceed from there. Some tensions arose later with Charles, as our world views took on shades of plant management. His dad was my father’s subordinate at Ternstedt.
My cousin John Sundwick, the youngest of my Uncle Bob’s three kids, was a year behind me in school, and lived only about four blocks away on Lavender Street; but, alas, our Elementary School paths never crossed, since school districts in Flint placed the boundary between Civic Park Elementary and Longfellow between us. Ballenger Highway was an insurmountable barrier to walking without crossing guards or lights, for kids our age. In Junior High, defined as grades 7-9, the “other Flint Sundwicks” lived in Florida, returning later to the Flint area.
In those frigid winter months, or on any rainy days, I remember rides proffered only by my own mother. Other moms didn’t seem to step up. Did they not have access to a car? In Flint? That’s possible, since there might not have been many two-car families in our predominantly working-class neighborhoods. Mom’s 1953 Chevy did yeoman’s service for seven years.

Michael Moore, in his memoir about growing up in Flint, “Here Comes Trouble” (2011), declared mid-century industrial Flint a relatively classless society. He wrote of living on the same block with doctors and lawyers, even though his own father was an hourly-rate assembly line worker at AC Spark Plug .  The same was true in my Ballenger Highway neighborhood – indeed, except for my own closest friends, I had no idea what people’s dads (and moms) did for a living. It was never a topic of conversation. And, even somebody as class-conscious as my mother, who put much effort into “social climbing” (allegedly for my dad’s career), would never say an unkind word about any of our neighbors, their income, education, or social status.
I learned later, in high school, that the Ternstedt people, except my friend Charles’ family, were ensconced in wealthier neighborhoods in town.
As the sixties arrived, our neighborhood was completed. The newest houses were somewhat larger and fancier than the originals like ours. Split levels appeared in the late fifties. And we learned that some people moving into them were part of a “professional” class, self-employed (especially doctors, tax accountants, funeral directors) – not necessarily reliant on General Motors for employment.
This change may have separated our neighborhood from the adjoining old Civic Park neighborhood, which was expressly built by GM for its workers in the teens and twenties. Despite the abandoned houses, vacant lots, and ghostly shell of an empty Haskell Community Center, a historical markerat Bassett Park, its former centerpiece, still stands to recognize this. Civic Park epitomizes the “old” Flint better than any other neighborhoods on the west side of town. It may symbolize the death of the city as well.
I always noticed what kind of cars were in my neighbors’ driveways. Back then, people changed cars frequently, typically every two years. They all had a sense of loyalty to Mother GM, apparently reasoning they could secure their own paychecks by buying its cars. Almost always Buicks and Chevrolets, the specific model, equipment, etc. waxed large in my observation. But we were the only folks in the neighborhood with a new Cadillac every year, from 1954-1958, until Dad’s career flatlined after his first coronary. We immediately switched to Chevy. 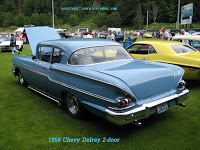 We did have two cars still, and a garage for them. Did the neighbors talk, when my dad courageously switched to the lowest-priced “stripped down” Chevy in 1958? My mom was embarrassed, and she told us as much! I had grown fond of the Cadillacs, too, but looking back I now understand my dad’s rather powerful social statement. Why did we care, really, about the Caddies? Did it matter what the neighbors thought?
My world changed when I entered Flint Central High School for the 1962-63 school year. It was the Harvard of Flint public high schools, the oldest (1923), situated near the Flint College and Cultural Center. And, all I had to do to get there was live in its district, which included a narrow swath on the west side of town (perhaps drawn for racial gerrymandering or integration?). It also included the “East Village” neighborhood – home to Flint’s old money, and intellectual elite.
It was a new world, indeed. Eventually, it led to a strong desire to escape!