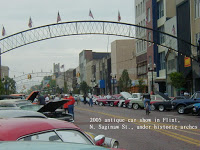 When I arrived in Flint, Michiganat age six, the city, incorporated in 1855, had already established itself: first as a hub for the central Michigan lumber industry, then earning the appellation “Vehicle City,” then as the manufacturing center of the largest auto maker in the world. To clarify, that nickname on the iconic iron arches over North Saginaw Street signified horse-drawn carriages. Flint had become the nation’s foremost manufacturer of such “vehicles” by 1900, thanks mostly to the Durant-Dort Carriage Company, and Flint Wagon Works.
William C. Durant and J. Dallas Dort were the driving force behind the city’s growth in those years, capitalizing on an auspicious lumber trade across the natural fords of the Flint River, and onward south and east. The raw materials for wagons and carriages thus were readily available. 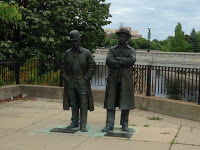 With the success of his carriage empire, Durant embraced risk. Some would call him a speculator. Both he and his partner, Dort, became eager to move into the nascent “horseless carriage” field.  They would need the right contacts for capital and mechanical ingenuity. Durant reached out to secure both. Investment capital came from New York, and he found ingenuity closer to home, in Detroit. Specifically, from David Dunbar Buick, who had tried building cars, but was less than successful as a businessman. Durant rescued him financially and moved production to Flint. Durant tirelessly promoted what was now his Buick automobile, made at the original Durant-Dort carriage factory in today’s “Carriage Town” – the oldest Flint neighborhood. His angle was safety, becoming a public concern in those early horseless carriage days. It worked. By 1909, Buick had become the best-selling car in the U.S. (outperforming Ford, Oldsmobile, and Cadillac). 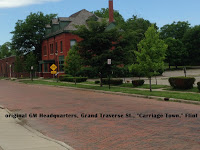 The amazing success of Buick in those early years may have gone to Bill Durant’s head. He started negotiating with his Detroit and Wall Street contacts to purchase other car makers. Some of his carriage-making executives, like A.B.C. Hardy and Charles W. Nash, were also pushing hard for more internal combustion powered vehicles. General Motors Corporation was chartered in 1908. It was Durant and Dort’s baby. Corporate HQs were right next door to the Durant-Dort Carriage Works factory. Nash would leave Durant to form his own brand, Nash Motors, in 1917.
GM continued to grow – not just in Flint, but also Detroit. And Canada, too, under a partnership with R.S. McLaughlin, who, like Durant, was the largest carriage maker in his country. Durant acquired Buick competitors Oldsmobile, Cadillac, and Oakland Motors. All these brands were retained, following Durant’s strategy to offer many different cars for different tastes at different price points.
Unfortunately, his next acquisition, Chevrolet, was not so successful at first.  The car was fine, but Durant’s holdings in Chevrolet were leveraged out of his control by partner McLaughlin — Chevrolet briefly became a Canadian make. By the mid-teens, however, Durant had bought it back, and Chevrolet was pulled into the Buick orbit – made in Flint. But, by 1921, Durant was gone again, starting his own Durant Motors (in Flint) which survived until the crash of 1929, when Durant left the automobile business for good.
Despite the slowdown in automobile production during the Depression, Detroit and Flint saw huge numbers of immigrants from the Deep South (both black and white), as well as even more depressed areas in Northern Michigan. My uncle Bob was the latter. He married into a family with deep roots in the Flint area, although he was a new employee at the AC Spark Plug plant on the east edge of town. By the time I arrived in 1953, they were already the “Flint Sundwicks.”
Rapid population growth in an era of declining demand for its products caused serious social tensions in Flint. This tension led to the famous Sit-down Strikesof 1936-37, credited by many labor historians and the Left as the beginning of the modern union movement in the U.S. (which should now be called the “post-war industrial union movement of the 20th century,” since unions are in decline in the 21st century).
It’s easy for somebody who grew up in Flint during that post-war glimmer of labor prosperity and rising expectations to romanticize the place where it happened, as well as the times. Were the strikes started, or abetted, by communists? The historical record is vague on this – since many of the interviews with participants were collected during the McCarthy witch-hunting era. People involved, if connected to left organizations, were often reluctant to admit it. My own experience during high school in the sixties tended to foster a romantic view of communist agitators manning the barricades (in Flint’s case, guarding their machines) – they were my heroes, whether they really existed or not.
In my imagination, those strikes set the stage for the Flint that I knew.