Courage, Determination, Strength
Face-to-Face with Disability Awareness
William Sundwick
We knew about her disability. We had hosted her in our home once before, three years ago, for a different event in Washington. But this time was different. Activism was her primary motive. The earlier event had been about religious advocacy in a more general sense. This time we shared her outrage and planned on participating in the “March for Our Lives,” anyway.
My primary mood preceding her arrival from Ottawa was that although we had an obligation to her (i.e., sympathy for her plight), I dreaded having to deal with her multiple disabilities for a whole week! She uses a walker due to balance issues, is hard of hearing with aids that are only partially effective, and near-sighted without a proper prescription for eyeglasses – apparently, even the Canadian health care system can’t help the poor and disabled enough. Also, swallowing and denture issues prevent her from eating many of the foods that are a staple in our household (not to mention restaurants).
Is it her poverty that’s the key to her difficulty? Perhaps — even in Canada.
Most of the resources on Turner Syndrome emphasize that early identification (even prenatal) is best for what may be prolonged ERT (Estrogen Replacement Therapy). That’s the first thing that jumps out when you read the descriptionsof the genetic abnormality. But our Canadian friend was not diagnosed until her teen years, when she failed to menstruate. Her symptoms nevertheless were manageable, once she accepted her likely infertility. She became a nanny and married an American.
Only as she approached middle age did things start to unravel. The 10 per cent hearing loss climbed over a few years to a 50 per cent loss. Brittle bones and balance issues caused increasing danger for falls – she’s used a walker since her mid-forties. When she flies, she requests wheelchair accommodation. She looks for ramps and cuts in the curb when walking on the street. Our house has none of that. Closed captions on TV help her immensely, and she can’t use voice communication on her phone. She also needs a Blackberry with actual keys, can’t use the touchscreens of typical smart phones and tablets. At the Dulles ticket counter, she had trouble reading even the large signs over the airline desks.
Her American husband died from a massive stroke in 2005. He had suffered cardiovascular problems since he was tortured as a Vietnam prisoner of war. Lobbying Congress was on her agenda while in Washington. She cares about torture (her Facebook page: “Torture Is Always Wrong”). She hand-delivered a one-page letter to each Senator’s office (all 100, both parties) condemning the nomination of Gina Haspel as Director of Central Intelligence. Despite them being in recess, she was pleased by the reaction she received in the three Senate Office Buildings. She also gave an enthusiastic thumbs-up to her visit with the Dept. of Veterans Affairs. She’s confident that, after applying in person, she will be seeing survivor benefits soon. 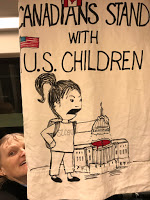 Her hand-painted sign for the March read “Canadians Stand with U.S. Children.” It was painted on a pillowcase by a friend. She claims that even in childhood she was outspoken – “listen to me!” “I’m special!” – she thanks her parents for much of her activism. The Turner diagnosis simply gave her more of a focus. Her husband’s struggle added to it. Now, she is convinced that she does matter – she can do much, she can instruct, she can share her strength and her resolve. She can create her own platform by shouting at demonstrations and writing angry emails. Her message, delivered wherever she can get a platform, consists mostly of: “there are many of us,” and “let me be your voice” – our rights are no fewer than others’ – and, we are eager to form alliances with other marginalized groups. We need to be “in your face” more, not less!
It is a powerful message. Those of us with privilege are forced to contemplate what it’s like to not be taken seriously. The implications for intersectionality cannot be missed. It really is about the blindness of privilege. We should all be called. There is no ambiguity in this message. We all need to seek affiliation with organizations that promote the marginalized — whether churches, political party, charitable organizations, or street protests.
The marginalized include children who are potential victims of gun violence.
The marginalized include veterans who have been victims, beyond their understanding, of the horrors of war.
The marginalized include people who suffer the effects of rare genetic abnormalities that come to rule their lives.
When the privileged start noticing the marginalized, that’s a beginning. Next comes analysis. What accommodations are needed for the marginalized group? Who are the decision makers? What can be done to affect the power relations between the marginalized group and the decision makers? The Disabled need to tell the Able-bodied what they need. Others need to tell the powerful and privileged what they require, as well. 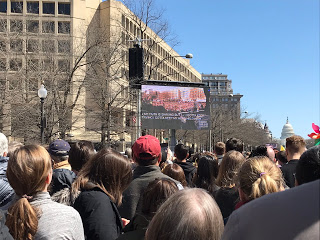 While it may feel good for the privileged to claim they sympathize (even empathize) with the marginalized, little is accomplished without action. Power analysis and direct confrontation – whether in the streets or at the polls, or both – is what will bring action. At the March, hundreds of thousands shouted in unison, “vote them out!”
In the meantime, those of us who must force ourselves to pay attention, because it is so unpleasant to be aware of the marginalized, can listen. We can reflect on our own precarious privilege. I sometimes wonder how long I have before my mental acuity starts to slip – already, I am rattled when my daily routines are interrupted for a week by the visit of a disabled house guest — I lost the nighttime use of my office, since it is in the only first floor room with a sofa bed (Quelle horreur!).
Yes, I am listening … yes, the struggle continues. It’s not easy to listen.

One thought on “Courage, Determination, Strength”