When “Travel” Means a One Hour Drive to Baltimore and a Hotel …
But, You Only Turn 70 Once!
William Sundwick
There was a secret plan. I was informed of its existence on Thursday, by my wife, the chief conspirator. While I had been trying to minimize the impact of my impending 70th birthday that Saturday, my family had not forgotten the date. When Wife asked, thoughtfully, whether I wanted the details, I said no. At that point, surprise was preferable.
After more intense questioning, however, I relented — surrendering by Friday evening. It would be an extended two-day adventure in Baltimore, “Charm City” … not unknown to us, but still a foreign land. My cosmopolitan elder son also had an approval role in the conspiracy initiated by my wife. He was more Baltimore savvy than either of us.
As my wife unveiled her meticulously planned itinerary, I was impressed. This was shaping up to be an extraordinary celebration – and the usual family dinner at a local restaurant wasn’t even part of it! When I did stuff like this 40+ years ago, I would call it tres cool.
I immediately began checking menus and maps for the places on the itinerary. First stop, lunch Saturday, would be an arty little butcher shop in the Remington neighborhood. Then, a distillery tour just a few blocks away. The Hotel Indigo was back downtown, in the Mt. Vernon historic district. We decided we’d take a cab to dinner at The Rusty Scupper, on the Inner Harbor. But, we’d need maps again for Sunday’s sojourn to Woodberry Kitchen in Druid Hill, and the Union Craft Brewery (Union Ave.). The menus, maps, tour planning were my preoccupation for the remainder of Friday evening. It was fun!
Saturday morning arrives. Let the packing begin! For toiletries, I unearthed a travel case with toothbrush, travel-size toothpaste, and shampoo left from last trip (probably Southern California two years ago?). Wife added mouthwash. The night before, I had carefully laid out my dress-for-dinner shoes, socks, slacks and woven shirt (Wife insists only she can fold clothes properly for suitcases). Better throw in an extra polo shirt, just in case something happens, white socks, boxers – don’t forget pajamas! How exciting!
The actual drive to Baltimore was easy, light traffic on I-95 N. We had no problem making it to Parts & Labor Butchery for our 12:30 reservation. The Volt’s battery charge disappeared after the first 37 miles, but we still showed a nearly 250-mile range from the auxiliary “range-extending” gasoline engine.
Parts & Labor is a butcher shop that used to be a garage, and shares its location with a little theater

group called “Single Carrot Theater.” It seems to fit the quirky milieu of its Remington neighborhood. I chose the Italian sub with N’duja (a thinly sliced pork shoulder), Lebanon bologna, ham, coppa, capicola – on a hoagie roll. I also enjoyed a “Maryland beer flight” with three 5-oz. glasses of local craft beers, from Baltimore and the Brookeville Beer Farm.  The cold cuts were extraordinary, and beer was good – but, Virginia has some amazing craft breweries, too.

After lunch, we drove all of seven blocks to the Baltimore Whiskey Company on Sisson Street. This is a small start-up distillery (established 2013) run by a trio of enterprising millennials. They rent an old warehouse (Baltimore has many of these), bought a still for $20K, acquired lots of oak vats and

barrels, and have, thus far, produced an outstanding barreled gin and several variations on apple brandy. Their current project, to be unveiled next year after suitable aging, is a genuine Baltimore rye. It was the first time I’d taken a tour of a distillery. Quite different from a craft brewery … but, it starts with beer, before distilling to whiskey. The “Shot Tower” barreled gin is exceptionally smooth, a great substitute in cocktails for either rye or bourbon. It’s gold, not clear!

A slight misreading of our map, and we found ourselves taking a “scenic” route back downtown, travelling down Monroe Street through block after block of what can only be called “forgotten” Baltimore – I was reminded of those riots along North Avenue in 2014. Boarded up storefronts, weeds in the sidewalks, small groups of people congregating on street corners talking. Nobody seemed to be going anywhere in particular.

We checked in at the Hotel Indigo, in the Mt. Vernon historic district, directly across from the Enoch Pratt Free Library, and one block from the Walters Art Museum. The hotel used to be the central Baltimore ‘Y’ – as can still be seen on its marquee. Unlike the route we followed getting here, this was “high culture” Baltimore.
Finding our way into the parking garage directly across Franklin Street from the hotel, and scratching our heads about how to use the strange yellow plastic “coin” that downtown Baltimore parking facilities use instead of tickets, we comfortably settled into our king room. Very modern, very minimalist, décor — no fewer than FIVE (5) USB ports built into the outlets and lamps! We could charge all phones and the iPad simultaneously, or choose to move from one chair to the next, cable in hand (why?). There were also two wall-mounted 40” TV screens — very 21st century!
I like hotels – usually enjoying them most when collapsing after a long day of travel, either by road or air, but those internal feel-good vibes were the same at Hotel Indigo, just an hour away from home.
We had some time to kill before calling a cab to transport us to The Rusty Scupper for an 8:00 dinner reservation. So, we decided to walk around Mt. Vernon – almost all the way to The Brewers Art, 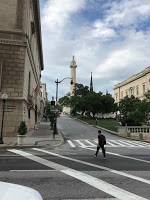 where we both fondly remember our son’s 2014 wedding rehearsal dinner (wedding venue: Baltimore Museum of Industry).  The neighborhood reminds me of Brooklyn, or some gentrified DC neighborhoods. Some people resent this sort of gentrification, thinking it robs a city of its “genuineness,” but it works for me! 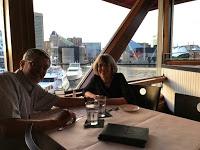 We didn’t want to take the car out of the garage, and be charged an additional $5 for moving it. And, calling a cab would allow us both to DRINK! We thoroughly enjoyed our dinners at The Rusty Scupper, perfect jumbo lump crab cakes, and crab stuffed shrimp for me. Also, I imbibed a “classic” Manhattan, not common for me (possibly thinking of my late mother? She always liked Manhattans).
The denouement of my fabulous celebratory weekend in Baltimore came Sunday, when we checked out of the hotel, spent a brief time at Walters Art Museum, retrieved the car, paid the garage based on encoded data in that peculiar yellow coin — and still wound up paying twice, because we had forgotten that we wanted to kill time before leaving!
Then, we headed north to Woodberry Kitchen for a 1:15 brunch reservation. Woodberry Kitchen is in Druid Hill, up I-83 some distance from downtown. It is an “American” restaurant, known for its local farm-to-table menu (i.e., for “locavores”). The brunch menu, however, was a little unfamiliar. My wife ordered eggs and “pork belly,” thinking ham – pork belly is not ham — incredible gobs of fat, almost inedible for her. I chose safer sea scallops with grits/scrapple (Cape May scallops). And, a fruity “day cocktail” made with Virginia rye whiskey and cherry liqueur.
Absorbing the alcohol sufficiently to drive the short distance from the parking lot to the Union Craft Brewery on Union Avenue, we were foiled by the first actual error in the original secret plan — they don’t do brewery tours on Sunday! But, we still purchased a collection of their products, as gifts for both sons, and a growler of their delightful “Genius Anyway” ale for me.
All great celebrations must come to an end. The trip home late Sunday afternoon was an emotional letdown, heavy traffic even before reaching the beltway, impossible backup once reaching 495 South. But, we had enjoyed a fantastic overnight in Charm City.
Our neighbor metropolis is often overlooked by NoVa types like us — it deserves better treatment. Baltimore is an “organic” city, inhabited by more natives than DC.  Washington has grown only because of the affluent young professionals, with much education and talent, who have been drawn here over the years, many of them choosing to stay and raise families.  But, they were all immigrants to the DC area, unlike the native-born population of Baltimore. Yet, the Mt. Vernon district is an example of gentrification as attractive, in its own (less ostentatious) way, as DC or Arlington.
It was a birthday celebration to remember. You only turn 70 once, and it is right that you should celebrate in an exceptional way! I am humbly grateful to my wonderful wife for organizing such an enjoyable excursion.